Note: This post is based on a presentation I just did at RuPy in Budapest. Instead of just posting my slides I thought it would be more useful if I wrote it down as a blog post while it’s still fresh in my mind. You can also watch the video recording of the presentation. FYI I’m planning to do a similar presentation at RubyConf, except I’ll remove the Python info, and instead compare how GC works inside of MRI vs. JRuby and Rubinius.

For a more detailed explanation of GC in Ruby and of Ruby internals generally, see my upcoming book, Ruby Under a Microscope, due out very soon from No Starch Press. 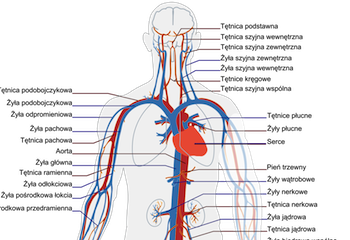 If your algorithms and business logic are the brain of your
application, which organ would the garbage collector be?

Since this is the “Ruby Python” conference, I thought it would be fun to compare how garbage collection works inside of Ruby and Python. But before we get to that, why talk about garbage collection at all? After all, it’s not the most glamorous, exciting topic, is it? How many of you get excited by garbage collection? [ A number of RuPy attendees actually raised their hands! ]

Recently in the Ruby community there was a blog post about how you can speed up your unit tests by changing your Ruby GC settings. I think that’s great. It’s good to run your tests faster and to run your app with fewer GC pauses, but somehow GC doesn’t really excite me. It seems like a boring, dry, technical topic at first glance.

But actually, garbage collection is a fascinating topic: GC algorithms are both an important part of computer science history, and a subject of cutting edge research. For example, the Mark and Sweep algorithm used by MRI Ruby is over 50 years old, while one of the GC algorithms used inside of Rubinius, an alternative implementation of Ruby, was invented just recently in 2008.

However, the name “garbage collection,” is actually misnomer.

The Beating Heart of Your Application

GC systems do much more than just “collect garbage.” In fact, they perform three important tasks. They 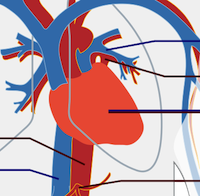 Imagine if your application was a human body: All of the elegant code you write, your business logic, your algorithms, would be the brain or the intelligence inside the application. Following this analogy, what part of the body do you think the garbage collector would be? [ I got lots of fun answers from the RuPy audience: kidneys, white blood cells :) ]

It’s always helpful to work through theories using examples. Here’s a simple class, written in both Python and Ruby, that we can use as an example today:

By the way, it’s amazing to me how similar this code is in both languages: Ruby and Python are really just slightly different ways of saying the same thing. But are the languages also implemented in a similar way internally?

When we call Node.new(1) above, what does Ruby do, exactly? How does Ruby go about creating a new object for us?

Surprisingly, it does very little! In fact, long before your code starts to run, Ruby creates thousands of objects ahead of time and places them on a linked list, called the free list. Here’s what the free list might look like, conceptually:

Imagine each of the white squares above is an unused, precreated Ruby object. When we call Node.new, Ruby simply takes one of these objects and hands it to us:

In the diagram above, the gray square on the left represents an active Ruby object we’re using in our code, while the remaining white squares are unused objects. [ Note: of course, my diagrams are a simplified version of reality. In fact, Ruby would use another object to hold the string “ABC,” a third object to hold the class definition of Node, and still other objects to hold the parsed, abstract syntax tree (AST) representation of my code, etc. ]

If we call Node.new again, Ruby just hands us another object: 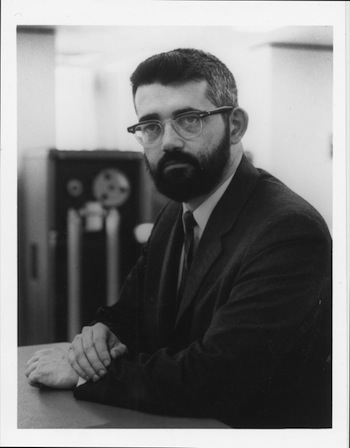 This simple algorithm of using a linked list of precreated objects was invented over 50 years ago by a legendary computer scientist named John McCarthy, while he was working on the original implementation of Lisp. Lisp was not only one of the first functional programming languages, but also contained a number of other groundbreaking advances in computer science. One of these was the concept of automatically managing your application’s memory using garbage collection.

The standard version of Ruby, also known as “Matz’s Ruby Interpreter” (MRI), uses a GC algorithm similar to the one used by McCarthy’s implementation of Lisp in 1960. For better or worse, Ruby uses a 53 year old algorithm for garbage collection. Just as Lisp did, Ruby creates objects ahead of time and hands them to your code when you allocate new objects or values.

We’ve seen that Ruby creates objects ahead of time and saves them in the free list. What about Python?

While Python also uses free lists for various reasons internally (it recycles certain objects such as lists), it normally allocates memory for new objects and values differently than Ruby does. 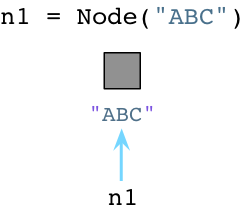 Python, unlike Ruby, will ask the operating system for memory immediately when you create the object. (Python actually implements its own memory allocation system which provides an additional layer of abstraction on top of the OS heap. But I don’t have time to get into those details today.)

When we create a second object, Python will again ask the OS for more memory: 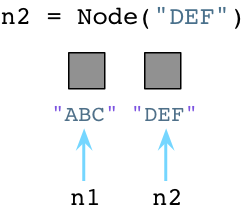 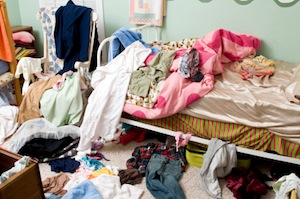 Ruby leaves unused objects lying around in
memory until the next GC process runs.

Seems simple enough; at the moment we create an object Python takes the time to find and allocate memory for us.

Back to Ruby. As we allocate more and more objects, Ruby will continue to hand us precreated objects from the free list. As it does this, the free list will become shorter:

Notice as I continue to assign new values to n1, Ruby leaves the old values behind. The ABC, JKL and MNO nodes remain in memory. Ruby doesn’t immediately clean up old objects my code is no longer using! Working as a Ruby developer is like living in a messy house, with clothes lying on the floor or dirty dishes in the kitchen sink. As a Ruby developer you have to work with unused, garbage objects surrounding you. 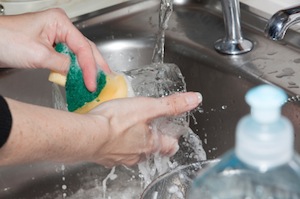 Python cleans up garbage objects immediately
after your code is done using them.

Garbage collection works quite differently in Python than in Ruby. Let’s return to our three Python Node objects from earlier: 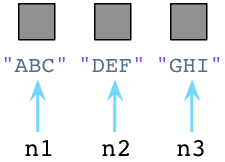 Internally, whenever we create an object Python saves an integer inside the object’s C structure, called the reference count. Initially, Python sets this value to 1: 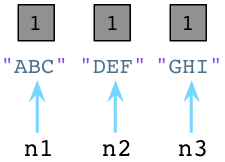 The value of 1 indicates there is one pointer or reference to each of the three objects. Now suppose we create a new node, JKL: 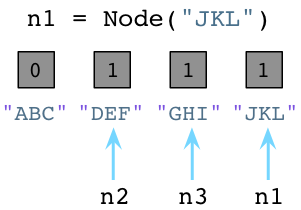 Just as before, Python sets the reference count in JKL to be 1. However, also notice since we changed n1 to point to JKL, it no longer references ABC, and that Python decremented its reference count down to 0.

At this point, the Python garbage collector immediately jumps into action! Whenever an object’s reference count reaches zero, Python immediately frees it, returning it’s memory to the operating system: 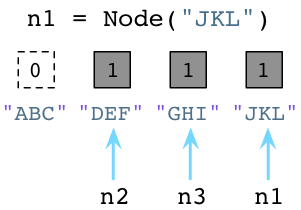 Above Python reclaims the memory used by the ABC node. Remember, Ruby simply leaves old objects lying around and doesn’t release their memory.

This garbage collection algorithm is known as reference counting. It was invented by George Collins in 1960 - not coincidentally the same year John McCarthy invented the free list algorithm. As Mike Bernstein said in his fantastic presentation on garbage collection at the Gotham Ruby Conference back in June: “1960 was a good year for Garbage Collectors....”

Working as a Python developer is like living in a tidy house; you know, the kind of place where your roommates are a bit OCD and are constantly cleaning up after you. As soon as you put down a dirty dish or glass, someone has already put it away in the dishwasher!

Now for a second example. Suppose we set n2 to refer to the same node as n1: 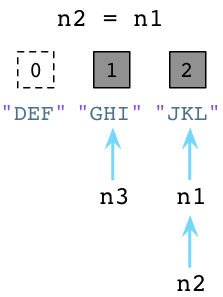 Above to the left you can see Python has decremented the reference count for DEF and will immediately garbage collect the DEF node. Also note that the JKL now has a reference count of 2, since both n1 and n2 point to it.

Eventually a messy house fills up with trash and life can’t continue as usual. After your Ruby program runs for some time, the free list will eventually be entirely used up:

Here all of the precreated Ruby objects have been used by our application (they are all gray) and no objects remain on the free list (no white squares are left).

At this point Ruby uses another algorithm invented by McCarthy known as Mark and Sweep. First Ruby stops your application; Ruby uses “stop the world garbage collection.” Ruby then loops through all of the pointers, variables and other references our code makes to objects and other values. Ruby also iterates over internal pointers used by its virtual machine. It marks each object that it is able to reach using these pointers. I indicate these marks using the letter M here:

Above the three objects marked with “M” are live, active objects that our application is still using. Internally, Ruby actually uses a series of bits known as the free bitmap to keep track of which objects are marked or not:

Ruby saves the free bitmap in a separate memory location in order to take full advantage of Unix copy-on-write optimization. For more information on this, see my article Why You Should Be Excited About Garbage Collection in Ruby 2.0.

If the marked objects are live, the remaining, unmarked objects must be garbage, meaning they are no longer being used by our code. I’ll show the garbage objects as white squares below:

Next Ruby sweeps the unused, garbage objects back onto the free list:

Internally this happens quite quickly, since Ruby doesn’t actually copy objects around from one place to another. Instead, Ruby places the garbage objects back onto the free list by adjusting internal pointers to form a new linked list.

Now Ruby can give these garbage objects back to us the next time we create a new Ruby object. In Ruby, objects are reincarnated, and enjoy multiple lives!

Mark and Sweep vs. Reference Counting

At first glance, Python’s GC algorithm seems far superior to Ruby’s: why live in a messy house when you can live in a tidy one? Why does Ruby force your application to stop running periodically each time it cleans up, instead of using Python’s algorithm?

Next week I’ll type up the rest of the presentation. I’ll discuss how Python handles cyclic data structures, and how GC works in the upcoming Ruby 2.1 release.