Obviously this is an utterly preposterous statement: it’s hard to think of a more ridiculous and esoteric coding requirement. I can just imagine all sorts of amusing conversations with designers and business sponsors: “No... the size of this <input> field should be 23... 24 is just too long!” Or: “We need to explain to users that their subject lines should be less than 23 letters...” Or: “Twitter got it all wrong... the 140 limit should have been 23!”

Why in the world would I even imagine saying this? As silly as this requirement might be, there is actually a grain of truth behind it: creating shorter Ruby strings is actually much faster than creating longer ones. It turns out that this line of Ruby code:

... is executed about twice as fast by the MRI 1.9.3 Ruby interpreter than this line of Ruby code:

Today I’m going to take a close look at the MRI Ruby 1.9 interpreter to see how it actually handles saving string values... and why this is actually true.

Not all strings are created equal

Over the holidays I decided to read through the the Ruby Hacking Guide. If you’ve never heard of it, it’s a great explanation of how the Ruby interpreter works internally. Unfortunately it’s written in Japanese, but a few of the chapters have been translated into English. Chapter 2, one of the translated chapters, was a great place to start since it explains all of the basic Ruby data types, including strings.

After reading through that, I decided to dive right into the MRI 1.9.3 C source code to learn more about how Ruby handles strings; since I use RVM for me the Ruby source code is located under ~/.rvm/src/ruby-1.9.3-preview1. I started by looking at include/ruby/ruby.h, which defines all of the basic Ruby data types, and string.c, which implements Ruby String objects.

Reading the C code I discovered that Ruby actually uses three different types of string values, which I call:

I found this fascinating! For years I’ve assumed every Ruby String object was like every other String object. But it turns out this is not true! Let’s take a closer look...

The standard and most common way for Ruby to save string data is in the “heap.” The heap is a core concept of the C language: it’s a large pool of memory that C programmers can allocate from and use via a call to the malloc function. For example, this line of C code allocates a 100 byte chunk of memory from the heap and saves its memory address into a pointer:

Later, when the C programmer is done with this memory, she can release it and return it to the system using free:

Avoiding the need to manage memory in this very manual and explicit way is one of the biggest benefits of using any high level programming language, such as Ruby, Java, C#, etc. When you create a string value in Ruby code like this, for example:

... the Ruby interpreter creates a structure called “RString” that conceptually looks like this:

You can see here that the RString structure contains two values: ptr and len, but not the actual string data itself. Ruby actually saves the string character values themselves in some memory allocated from the heap, and then sets ptr to the location of that heap memory, and len to the length of the string.

Here’s a simplified version of the C RString structure:

I’ve simplified this a lot; there are actually a number of other values saved in this C struct. I’ll discuss some of them next, and others I’ll skip over for today. If you’re not familiar with C, you can think of struct (short for “structure”) as an object that contains a set of instance variables, except in C there’s no object at all - a struct is just a chunk of memory containing a few values.

I refer to this type of Ruby string as “Heap String,” since the actual string data is saved in the heap.

Another type of string value that the Ruby interpreter uses is called a “Shared String” in the Ruby C source code. You create a Shared String every time you write a line of Ruby code that copies one string to another, similar to this:

Here the Ruby interpreter has realized that you are assigning the same string value to two variables: str and str2. So in fact there’s no need to create two copies of the string data itself; instead Ruby creates two RString values that share the single copy of the string data. The way this works is that both RString structs contain the same ptr value to the shared data... meaning both strings contain the same value. There’s also a shared value saved in the second RString struct that points to the first RString struct. There are some other details which I’m not showing here, such as some bit mask flags that Ruby uses to keep track of which RString’s are shared and which are not. 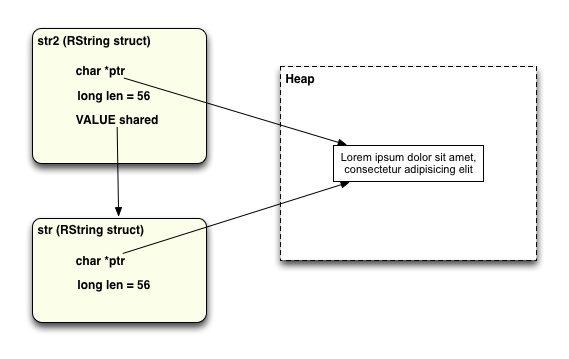 Aside from saving memory, this also speeds up execution of your Ruby programs dramatically by avoiding the need to allocate more memory from the heap using another call to malloc. Malloc is actually a fairly expensive operation: it takes time to track down available memory of the proper size in the heap, and also to keep track of it for freeing later.

Here’s a somewhat more accurate version of the C RString structure, including the shared value:

Strings that are copied from one variable to another like this I call “Shared Strings.”

The third and last way that MRI Ruby 1.9 saves string data is by embedding the characters into the RString structure itself, like this:

If you’re not familiar with C code, the syntax char ary[100] creates an array of 100 characters (bytes). Unlike Ruby, C arrays are not objects; instead they are really just a collection of bytes. In C you have to specify the length of the array you want to create ahead of time.

Whenever you create a string value in your Ruby 1.9 code, the interpreter goes through an algorithm similar to this:

For those of you familiar with the C language, here’s the actual Ruby 1.9 definition of RString:

I won’t try to explain all the code details here, but here are a couple important things to learn about Ruby strings from this definition:

Here’s the line of code from ruby.h that defines this value:

On a 64 bit machine, sizeof(VALUE) is 8, leading to the limit of 23 characters. This will be smaller for a 32 bit machine.

Let’s try to measure how much faster short strings are vs. long strings in Ruby 1.9.3 - here’s a simple line of code that dynamically creates a new string by appending a single character onto the end:

The new_string value will either be a Heap String or an Embedded String, depending on how long the str variable’s value is. The reason I need to use a string concatenation operation, the + 'x' part, is to force Ruby to allocate a new string dynamically. Otherwise if I just used new_string = str, I would get a Shared String.

Now I’ll call this method from a loop and benchmark it:

Here I’m using the benchmark library to measure how long it takes to call that method 1 million times. Now running this with a variety of different string lengths:

We get an interesting result:

Here’s a graph showing some more data; the bars show how long it takes to allocate 1 million strings of the given length:

Don’t worry! I don’t think you should refactor all your code to be sure you have strings of length 23 or less. That would obviously be ridiculous. The speed increase sounds impressive, but actually the time differences I measured were insignificant until I allocated 100,000s or millions of strings - how many Ruby applications will need to create this many string values? And even if you do need to create many string objects, the pain and confusion caused by using only short strings would overwhelm any performance benefit you might get.

For me I really think understanding something about how the Ruby interpreter works is just fun! I enjoyed taking a look through a microscope at these sorts of tiny details. I do also suspect having some understanding of how Matz and his colleagues actually implemented the language will eventually help me to use Ruby in a wiser and more knowledgeable way. We’ll have to see... stay tuned for some more posts about Ruby internals!