This is an excerpt from the third chapter of an eBook I’m writing this Summer called “Ruby Under a Microscope.” My goal is to teach you how Ruby works internally without assuming you know anything about the C programming language.

If you’re interested in Ruby internals you can sign up here and I’ll send you an email when the eBook is finished. I also posted one entire chapter in May, and two other excerpts from Chapter One and Chapter Two last month.

We all learn very early on that Ruby is an object oriented language, descended from languages like Smalltalk and Simula. Everything is an object and all Ruby programs consist of a set of objects and the messages that are sent back and forth among them. Typically we learn about object oriented programming by looking at how to use objects and what they can do: how they can group together data values and behavior related to those values, how each class should have a single responsibility or purpose or how different objects can be related to each other through encapsulation or inheritance.

But what are Ruby objects, exactly? What information does an object contain? If I were to look at a Ruby object through a microscope, what would I see? Are there any moving parts inside? And what about Ruby classes - all of us know how to create and use Ruby classes, but what exactly is a class? Finally, what are modules in Ruby? How are modules and classes related? What happens when I include a module into a class? How does Ruby find which class or module implements a given method?

In this chapter I’m going to answer these questions by exploring how Ruby works internally. Looking at exactly how Ruby implements objects, classes and modules can give you some insight into how they were intended to be used, and into how to write object oriented programs using Ruby.

What’s inside a Ruby object?

Ruby saves all of your custom objects inside a C memory structure called RObject, which looks like this in Ruby 1.9 and 2.0: 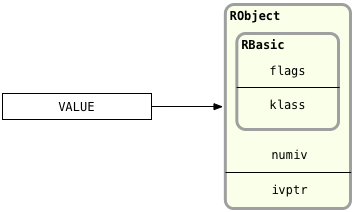 On the left is a pointer to the RObject structure. Internally Ruby always refers to any value using these VALUE pointers. On the right you can see the RObject value is divided into two halves: RBasic and RObject. The RBasic section contains information that all values use, not only objects: a set of boolean values called flags which store a variety of internal, technical values and also a class pointer, called klass. The class pointer indicates which class this object is an instance of. At the bottom in the RObject specific portion Ruby saves an array of instance variables that this object instance contains using two values: numiv, the instance variable count, and ivptr, a pointer to an array of values.

Summarizing the contents of the RObject structure, we can write a very technical definition of what a Ruby object is:

At first glance, this definition doesn’t seem that useful at all: it doesn’t help me understand the meaning or purpose behind objects, or how to use them in a Ruby program. Why does Ruby implement objects in this way? The answer is simple: Ruby saves this information in RObject because it has to in order to support the basic features of the language.

For example, suppose I have a simple Ruby class:

Ruby needs to save the class pointer in RObject because every object has to keep track of the class you used to create it:

Ruby also has to keep track of any values you save in it - Ruby uses the instance variable array to do this:

Here you can see Ruby now also displays the instance variable array for euler when I inspect it again. Ruby needs to save this array of values in each object since every object instance can have different values for the same instance variables - for example:

Now let’s take a look at Ruby’s C memory structures in a bit more detail - when you run this simple script, Ruby will create one RClass structure and two RObject structures: 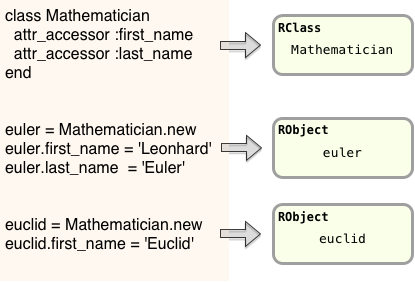 I’ll cover how Ruby implements classes with the RClass structure in the next section, but here is how Ruby saves the the mathematician information in the two RObject structures in more detail: 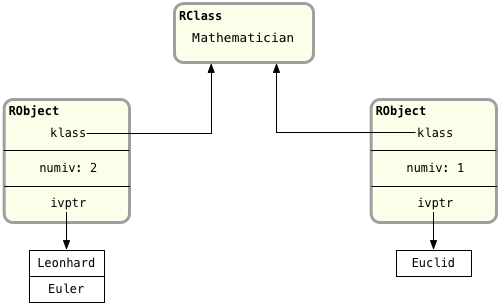 This is how Ruby saves custom classes, like my Mathematician class, in RObject structures. But we all know that every Ruby value, including basic data types such as integers, strings or symbols, are also objects. The Ruby source code internally refers to these built in types as “generic” types. How does Ruby store these generic objects? Do they also use the RObject structure? The answer is no: internally Ruby uses a different C memory structure to save values for each of its generic data types, and not RObject. For example, Ruby saves string values in RString structures, arrays in RArray structures and regular expressions in RRegexp structures, etc. Ruby only uses RObject to save instances of custom object classes that you create, and for a few custom object classes Ruby creates internally as well.

However, all of these different structures share the same RBasic information that we saw in RObject: 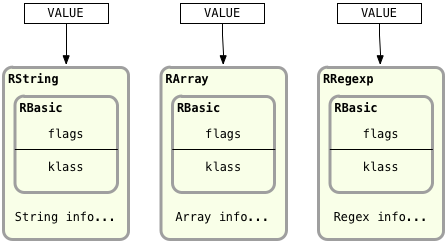 Since the RBasic structure contains the class pointer, each of these generic data types is also an object - they are all instances of some Ruby class, indicated by the class pointer saved inside of RBasic.

As a performance optimization, Ruby saves small integers, symbols and a few other simple values without any structure at all. Ruby saves these values right inside the VALUE pointer:

That is, these VALUEs are not pointers at all; instead they are the values themselves. For these simple data types, there is no class pointer. Instead Ruby remembers the class using a series of bit flags saved in the first few bits of the VALUE. For example, all integers have the FIXNUM_FLAG bit set, like this:

Whenever the FIXNUM_FLAG is set, Ruby knows this VALUE is really a small integer, an instance of the Fixnum class, and not a pointer to a value structure. There is also a similar bit flag to indicate if the VALUE is a symbol, and values such as nil, true and false also have special values.

It’s easy to see that integers, strings and other generic values are all objects using IRB:

Now let’s reread our definition of a Ruby object from above:

What about instance variables for generic objects? Do integers, strings and other generic data values have instance variables? That would seem a bit odd. But if integers and strings are objects, then this must be true! And if this is true, where does Ruby save these values, if it doesn’t use the RObject structure?

Using the instance_variables method you can see that each of these basic values can also contain an array of instance variables, as strange as that might seem at first:

You can repeat the same exercise using symbols, arrays, or any Ruby value whatsoever. Every Ruby value is an object, and every object contains a class pointer and an array of instance variables. 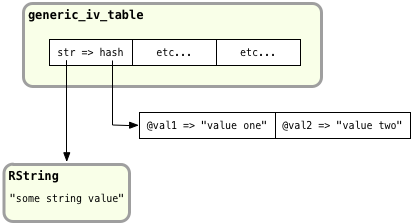 Experiment 3-1: How long does it take to save a new instance variable?

Deducing what’s inside the RClass structure

Experiment 3-2: Where does Ruby save class methods?

Experiment 3-3: Modifying a module after including it

This experiment was suggested by Xavier Noria… read it in the finished eBook.

InvokeDynamic and method lookup in JRuby 1.7

Modules and methods in Rubinius