The goto statement is one of the most infamous and troublesome features of old, archaic languages like Fortran. It allowed programmers to quickly create spaghetti code that was confusing and impossible to understand. Thankfully when structured programming came into use in the late 1960s and 1970s with Algol, Pascal and later C, goto was no longer necessary.

This is all ancient history: why am I bringing it up? Well, I just discovered this week that Ruby, one of the most beautiful and expressive languages in use today, includes support for the goto statement!

Here’s how it works:

The __goto__ statement will cause the MRI Ruby 1.9 interpreter to jump up to the __label__ statement on the first line, since they both refer to the same symbol :loop. The last line of code will never be executed at all. Brilliant, isn’t it? We’ve managed to degrade and reduce Ruby to the level of Fortran.

However, there’s a catch. Ruby 1.9 doesn’t support goto by default. You need to enable it by setting an optional virtual machine setting called SUPPORT_JOKE and then recompiling Ruby from source. That’s right: the Ruby core team has included optional support for the goto statement in Ruby 1.9 as a joke! But it’s no joke: the __goto__ and __label__ methods actually do work if you enable SUPPORT_JOKE. Today I’ll show you exactly how to do this, and also explain how the Ruby 1.9 byte code compiler and virtual machine (called YARV) implement goto.

In case you get bored by all of the technical details, be sure to skip down to the bottom of the article, where I reveal a couple of other jokes included in Ruby 1.9 by the Ruby core team!

First, let’s try running the code above directly using a normal Ruby 1.9.3 MRI interpreter. I’ll paste the code above into a file called “joke.rb” and then run it like this:

No surprise: since I haven’t yet enabled goto statement support, I get an error from Ruby stating that the __label__ method is not defined on line 1. Until you enable the SUPPORT_JOKE setting, the __goto__ and __label__ methods aren’t defined.

Here’s how to enable the goto statement support. First, find the source code for your Ruby 1.9 installation, and open the “vm_opts.h” header file in an editor. Here’s how I would do that on my Mac laptop using RVM:

Depending on exactly which version of Ruby 1.9 you have installed and how you obtained it, you might have to look in a different path for the Ruby C source code. Anyway, once you find the vm_opts.h file, you’ll see a series of settings for the Ruby 1.9 virtual machine:

This is actually interesting; from the comments it looks like using the VM::CompileOption Ruby object you can enable or disable different YARV optimizations at runtime. Someday I might take a look into what these mean and write up a blog post on YARV internals. But for today, let’s continue to scroll down and take a look at the bottom of the vm_opts.h file:

And there it is: at the very bottom of the file we see a value called SUPPORT_JOKE which is set to 0. Strangely, there’s no documentation or explanation as to what the joke might be, or what might happen if you changed the value to 1. As I explain below in the rest of this article, what happens is that changing this value to 1 will enable Ruby’s goto statement support... along with two other jokes!

... and save the modified vm_opts.h file. Now I need to recompile Ruby, using the “make” command like this:

You can see most of the C source code files depend on vm_opts.h and will be recompiled with the new setting. Now I just need to install the new Ruby executable file like this:

And I’m done - my special, customized Ruby 1.9 executable is now ready. Let’s give it a try and see what happens:

While this might be worth a few laughs, I view it as a learning opportunity as well. The rest of this article will show you what happens inside Ruby when you set SUPPORT_JOKE=1, and how the goto statement actually works. Before we get to the C language details of the Ruby byte code compiler and the SUPPORT_JOKE setting, let’s start with a brief overview of the Ruby 1.9 parse and compile process. Here’s a high level picture of what happens when you run a Ruby 1.9 program:

Going from left to right, whenever you run a Ruby program it:

Now let’s take a look at how the “joke.rb” program above is parsed by Ruby. The best way to get a sense of how Ruby does this is by using the Ripper library, like this:

I first learned about Ripper watching Peter Cooper’s excellent RubyTrickShots screen cast. Also, I've skipped over the tokenize/lex step here today, but adding a call to Ripper.lex would display the output of the Ruby tokenizer. Running this, Ripper.sexp will display the AST produced by the Bison parser inside of Ruby:

To make this easier to understand, here’s a graphical representation of the syntax tree for part of the joke.rb script: 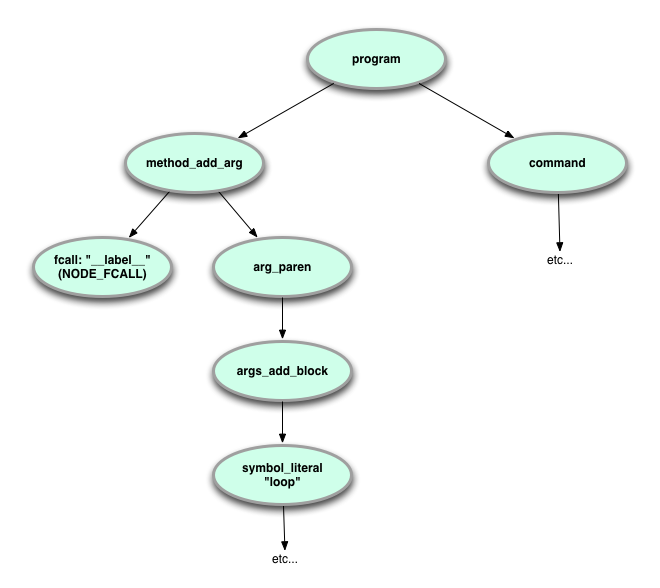 This is just part of the syntax tree for my joke.rb file. Notice that in the node on the left, representing the call to __label__(:loop), I’ve included the constant NODE_FCALL used internally by the Ruby C source code to identify function calls in the syntax tree. We’ll see this used in a moment.

After tokenizing and parsing your script, the next thing Ruby does is to compile the AST node tree into byte code that the YARV engine can later execute. As Rohit Arondekar pointed out in a comment on my last post the easiest way to see the output of the Ruby 1.9 compiler is to use the RubyVM object like this:

Running this, I get:

This is actually easy to understand, since the byte code instructions are quite high level and intuitive. You can see how the __goto__ and __label__ statements work: on line 16 there’s a jump instruction which sends the YARV engine back up to line 2 in an endless loop.

Finding where SUPPORT_JOKE is used in the Ruby C source code

Now that we have a high level understanding of how my simple joke.rb Ruby script works, let’s return to the SUPPORT_JOKE setting and take a look at exactly what happens when you enable it. SUPPORT_JOKE appears in a few places in the Ruby 1.9 source code, but primarily it’s used in the compile.c file, which implements the Ruby AST to byte code compiler. If you open compile.c and search for SUPPORT_JOKE, you’ll find this C code:

For the sake of simplicity, I’ve omitted some of the C code you would see in compile.c. But I have shown enough code to get the basic idea across. Let’s take it one step at a time....

First, you should notice the two calls to CONST_ID - these define two identifiers called __goto__and __label__. This is actually a very unusual, odd way of defining Ruby keywords! In the Ruby parser and compiler, most reserved words and other hard coded constants of the language are defined in a variety of standard ways. But what we see here is that, only in the case when SUPPORT_JOKE=1, the Ruby compiler explicitly defines these two special identifiers inline right in the ruby byte code compiler C code. Very strange!

Next, if you read the following if statement, you see that Ruby is checking whether the current node object is of type NODE_FCALL. Here node refers to one of the nodes in the AST tree we saw above. NODE_FCALL corresponds to the :fcall symbol we saw in the Ripper output. What’s happening in this part of the compile.c file is that Ruby is stepping around the AST tree above, and converting each tree element into byte code. Translating this if statement into English we get: “If the current node is a function call and the function being called is either __goto__or __label__....”

Finally, if the statement is true and after executing some other C code I’ve omitted here, Ruby will call either ADD_INSNL or ADD_LABEL to output new byte code. In this case we can see ADD_INSNL adds a jump byte code command to the specified label:

All of this code is only included in Ruby if SUPPORT_JOKE is true; if you haven’t enabled SUPPORT_JOKE then none of this C code will even be compiled, because of the #if SUPPORT_JOKE statement at the top.

It turns out there are two other jokes the Ruby core team has included in the compiler:

Once you’ve enabled SUPPORT_JOKE and recompiled, you’ll be able to run these two other special, hard coded methods: