Back in February the SeatGeek team open sourced a gem they call Soulmate that implements autocomplete using a Redis back end. “Soulmate finishes your sentences” as they say on their Github readme page. You can see it in action on SeatGeek.com. Soulmate is very useful: many of us need type ahead search behavior and using Redis is a great way to make it fast and snappy. But more importantly, Soulmate is a great example of how to create an index in Redis ahead of time, allowing for very fast lookups later. Take a few minutes to learn how Soulmate works; chances are you’ll be able to use the same approach in your own app with a completely different data set.


I'll get started today by showing you step by step how to setup a new Rails 3.1 app with Soulmate and Redis, using the jQuery UI autocomplete widget. [Next week I’ll follow this up with a second article](https://patshaughnessy.net/2011/11/29/two-ways-of-using-redis-to-build-a-nosql-autocomplete-search-index) on the details of exactly how Soulmate’s Redis caching algorithm works. But before we start building the sample app, let’s learn something about the Soulmate gem....

How Soulmate was intended to work

Here’s a conceptual diagram showing how you would normally use Soulmate: 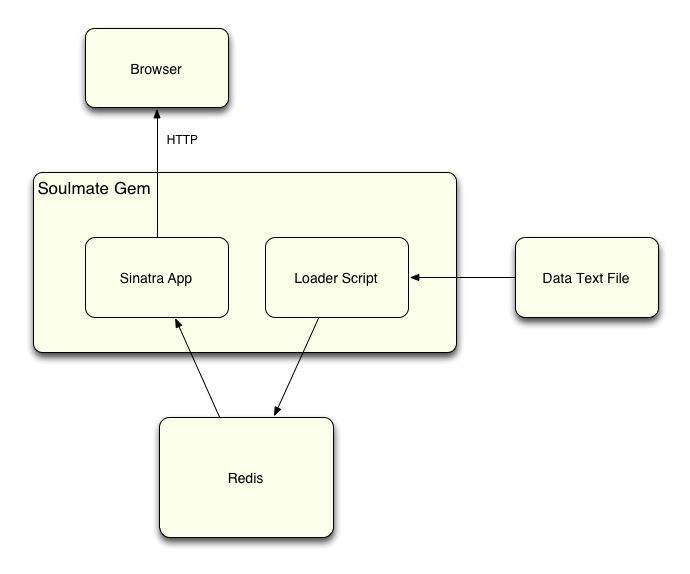 The Soulmate gem contains two components that you interact with directly:

Check out Soulmate’s github readme page for more details on exactly how to use the load script, and also on how to send search requests to the Sinatra app. SeatGeek also explain how to mount their Sinatra app inside your Rails 3 app, so you can take advantage of Soulmate without having to setup a separate server, etc.

Using Sinatra is a great way to get started with Soulmate quickly; however, I decided to set up the gem inside my Rails 3.1 app today in a slightly different way. Instead of interacting with Soulmate via the load script and Sinatra, I called the Soulmate::Loader and Soulmate::Matcher Ruby classes found inside the Soulmate gem directly from an ActiveRecord model. Here’s a diagram showing my setup: 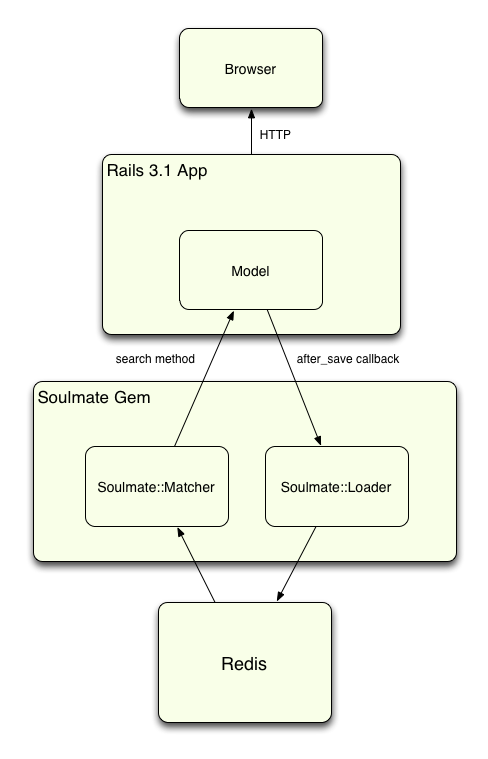 My ActiveRecord model's database table contains the words my users will search for using autocomplete, and uses an after_save callback to save them in Soulmate by calling the same code that Soulmate’s loader script does: the Soulmate::Loader class. This allows me to keep my SQL database in sync with my Redis autocomplete cache. Later when my users perform a search from an autocomplete text field, my app will call the same code that Soulmate’s Sinatra app did: the Soulmate::Matcher class, without the need for a separate Rack app to service these results.

This was actually all very easy to do! Soulmate’s code was quite easy to follow and everything just worked for me. To prove it, let’s spend 10 or 20 minutes together and setup a new sample Rails 3.1 app right now that will use Soulmate and Redis for autocomplete.

I’ll assume most of you have already installed and used Redis by now; if not then I hope reading this article will encourage you to take the time to download and become familiar with it. If you have Homebrew, then it’s just a matter of running:

If not, then you easily built it from source; see: http://redis.io/download for details.

Now that we have Redis, let’s create a new example Rails 3.1 app that we can try out Soulmate with:

And let’s add the Soulmate gem to the Gemfile, along with Faker, which will give us some silly names to test autocomplete with:

Now we need to run bundle update to install Soulmate and Faker, since Rails already ran bundle install for us when we created the new app:

Step 2: Creating a model and some test data

And next let’s write some code to create 1000 test person records using the Faker gem we added above. Editing db/seeds.rb:

Finally we can create our database along with 1000 silly names:

Step 3: Adding the after_save callback, and loading the data into Redis

As I discussed above, today I’m going to call the Soulmate code directly to load the Redis cache with data, instead of using the load script. To do that, all we need to do is add an after_save callback to our Person model:

My Person model can access the Soulmate::Loader class since I included the Soulmate gem in my bundle when I created the app. Now if I drop and recreate my database, all of the 1000 names will be loaded right into Redis via Soulmate, since the after_save callback will be called 1000 times when the “db:seed” rake task is called by “db:reset:”

Oops - I forgot to start my redis server; let’s do that in a separate terminal window:

And back in my first terminal window I’ll try again:

A window into your soul: taking a quick peek at the Redis data set

Let’s take a look at the special sauce that makes Soulmate interesting, how it saves the autocomplete data inside of Redis. To get sense of how this works, I’ll open the Redis command line interface:

Next week I’ll cover this in a lot more detail, but for now let’s take a quick look at how the autocomplete data are saved in Redis. First, I’ll take a look at a few entries in the “soulmate-data:person” hash:

These wonderful names were generated by the call to Faker::Name.first_name and Faker::Name.last_name above in seeds.rb. The Redis key names use the pattern “soulmate-data:person” because I passed “person” into the constructor for the Soulmate::Loader class above. You can see the Soulmate saves each name as a separate element in this Redis hash object.

The real magic happens next: Soulmate also calculates a series of substrings for each phrase, or name in my example, and saves them separately into a search index, using a Redis sorted set object. For example, the name “Laurel” would be split into these possible substrings:

We can also see these values, along with a few other "Lau" substrings from other names, using the Redis command line:

If you try this yourself, you’ll get different values since the Faker gem creates random names. You might have to try different combinations of two or more letters to see the data.

What we see here is really a search index: Soulmate has expanded all the possible combinations of matching letters your users might type as keys in this sorted set. The values corresponding to these keys are the id’s found above in the Redis hash - also the id’s of my ActiveRecord model objects! When a user types “lau” for example, Soulmate can issue a Redis query to figure out very quickly which person objects match... all without ever calling ActiveRecord to issue a single SQL query!

There are a lot of interesting details here; stay tuned for a follow up post next week on how this algorithm actually works, and the computer science theory behind it.

Step 4: Putting it all together with JQuery in Rails 3.1

Ok, let’s finish up our Rails 3.1 app and see Soulmate in action! I decided not to use a Rails autocomplete gem, such as the excellent rails3-jquery-autocomplete, since I don’t need any help with my server code; Soulmate is doing it all for me. Instead, I’ll just write the view code manually using the jQuery UI autocomplete widget. First I’ll head over to jquery-ui.org: 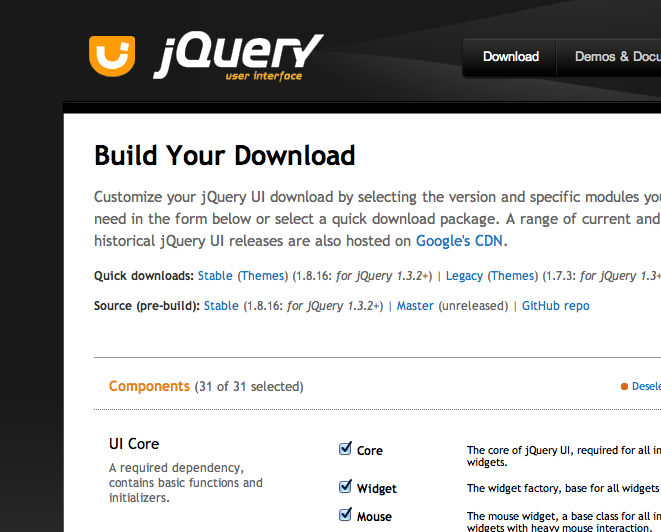 ... and then deselect everything and then check off just the autocomplete widget: 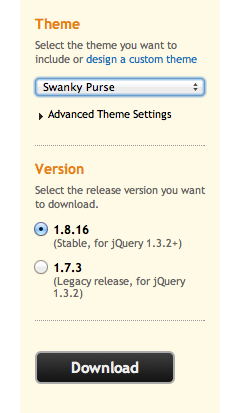 And I’ll download the tar ball to my laptop. Now I just need to copy the “Swanky Purse” jQuery UI files into my Rails 3.1 asset folder like this:

This gives me both the Javascript I need to perform the autocomplete, and also the styling required to make it look “swanky!” Now I’ll generate a controller and view codes files for my sample web site like this:

This will create an index action, and also a second action to handle the AJAX requests generated by the autocomplete widget. Next I’ll enable the default root in routes.rb:

And finally my view will consist of a single text field; editing app/views/people/index.html.erb:

Here I call the jQuery UI autocomplete widget on page load, and set it up against my single text field. I’ve set the source attribute to be the path of the “autocomplete_person_name” action, which I included in the people controller generate command above. Using unobtrusive Javascript would be much better, but for today this keeps things simple. If I have time, I’ll try to add Soulmate support to an existing Rails autocomplete gem, such as rails3-jquery-autocomplete.

The last thing we need to do to finish our Soulmate sample app is to actually call Soulmate when users start typing. To do this, all we need to do is implement the autocomplete_person_name action in the PeopleController:

This just passes the “term” parameter, sent by JQuery, to the Person model’s search method and then renders the return value, the matching names, as JSON. And now let’s write that Person.search method like this:

Just like I did earlier in the after_save callback, here i’m calling the Soulmate gem directly, this time using the Soulmate::Matcher class. I pass the same “person” string into the constructor, and then just call the same method the Soulmate Sinatra app does: matches_for_term, which calls Redis to perform the search! Once I have the matches, all I need to do is convert them into the format that the jQuery UI widget expects: an array of hashes containing the id, label and value for each name.

Now running my Rails server and trying it out, I can see that “Swanky Purse” style: 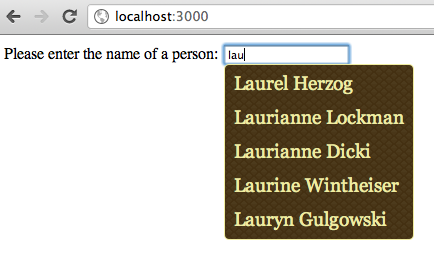 Whether or not you ever need to use autocomplete in your Rails 3 app, I hope this article will inspire you to consider using Redis the next time you have a large data set that you need to access quickly. Redis is an amazing tool, and when your data set is appropriate it can provide you with lightning fast query results. Next week I’ll continue my discussion of Soulmate, taking a closer look at the details of the autocomplete caching algorithm. There are a lot of interesting details there and a lot to learn from about how to use Redis.