I just updated the View Mapper gem to support Paperclip. You can use it to generate scaffolding code that supports uploading and downloading Paperclip file attachments.

Creating a view for an existing model

… you can generate a “Paperclip view” for this model like this:

This will generate a controller, view and other code files that support uploading and downloading files. If you run your app you’ll see the typical scaffolding user interface but with a file field for the “mp3” Paperclip attachment: 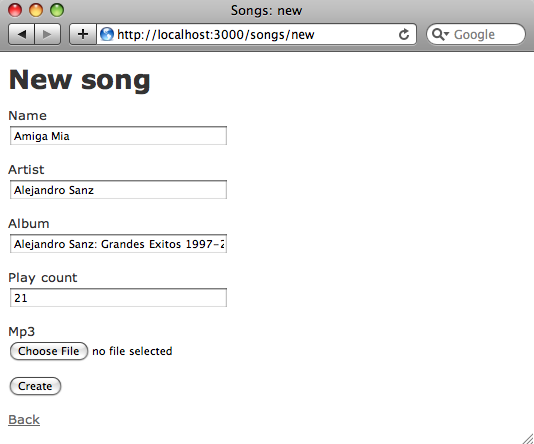 If you’re not very familiar with Paperclip and how to use it or if you just want to get a Rails upload form working very quickly, then View Mapper can help you.

View Mapper also provides a generator called “scaffold_for_view” that is identical to the standard Rails scaffold generator, except it will create the specified view. As an example, let’s create a new Rails app from scratch that uses Paperclip; you should be able to type in these precise commands on your machine and get this example to work.

And now we can generate a new “Song” model that has a Paperclip attachment called “MP3” using View Mapper like this:

Wait… I forgot to install Paperclip; let’s do that and then try again:

Finally, we just need to run db:migrate – one minor detail here is that the scaffold_for_view generator included the Paperclip columns (“mp3_file_name,” “mp3_content_type,” etc…) in the migration file to create the songs table:

Now you can run your app and see the scaffolding UI I showed above, and will be able to upload and download MP3 files using Paperclip.

The code in bold was generated by View Mapper specifically to support Paperclip since we used the “--view paperclip” command line option. You can see that “:html => { :multipart => :true }” was added to form_for to allow for file uploads, and also a file_field was added for the mp3 Paperclip attachment.

If you take a look at the show view, you’ll see:

Here a link to the file attachment was added, using Paperclip to provide the name and URL of the attachment.

Next I’ll be adding support for nested attributes and complex forms to View Mapper.